World War II combatives are close quarter combat techniques that include hand-to-hand combat, advanced firearm point shooting methods, and weapons techniques (knife/bayonet/improvised weapons) that were taught to allied special forces during World War II.  They came about from the need for the Allied forces to have every advantage they could over their opponents, especially when it came to physical encounters. To help give them this edge, William E. Fairbairn and Eric Sykes were recruited by the Special Operations Executive (SOE) to teach a lethal version of their martial art of defendu (known as Close Quarters Combat) and pistol shooting to UK, US, and Canadian special forces.

Defendu is a hand-to-hand combat system developed by Fairbairn that is based on his training in boxing, wrestling, savate, jiu jitsu, and judo, as well as fights that he was involved in as a policeman. Its movements are meant to string together like the chains in boxing, delivering a series of blows meant to incapacitate your opponent. You can get a closer look at how those moves are combined here. 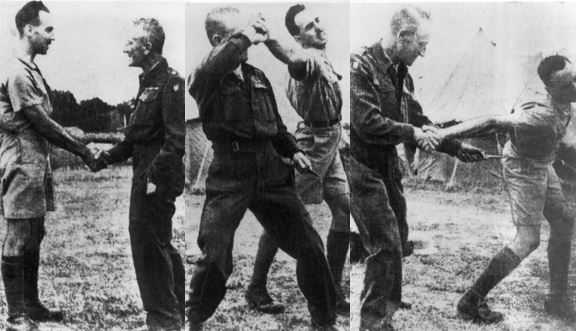 Fairbairn and others expanded on defendu to create the Close Quarters Combat system for military personnel. The two practices differed in that the original version of defendu was based on self-defense and restraint, and was primarily used by police forces. On the other hand the Close Quarters Combat system concentrates on the rapid disabling of an opponent, with potentially lethal force being used if necessary.

Here is some old footage of Fairbairn teaching his techniques to soldiers during WWII. In it, Fairbairn explains why these techniques are necessary for these soldiers to know how to properly fight and defend themselves when on duty, as this knowledge can make all the difference in whether or not the soldier is killed or captured.